The Gebelein Mummies of Ancient Egypt (Kemet) are the oldest found in Africa so far. Their tattoos are still visible and well preserved owing to Kemet’s intricate mummification process. Several gendered female and male mummies were found, dating from the Predynastic Period (6000-3150 B.C.) to the New Kingdom (1550-1069 B.C.). All are permanently adorned with the Kemetic pictographic language given the Greek name, hieroglyph (hiero- "holy/sacred" and -glyph "carving/to note/hollow out"). Despite its most common use on temples, monuments, and papyrus--"hieroglyph," is equally appropriate for the act of indelibly inscribing symbols into flesh. 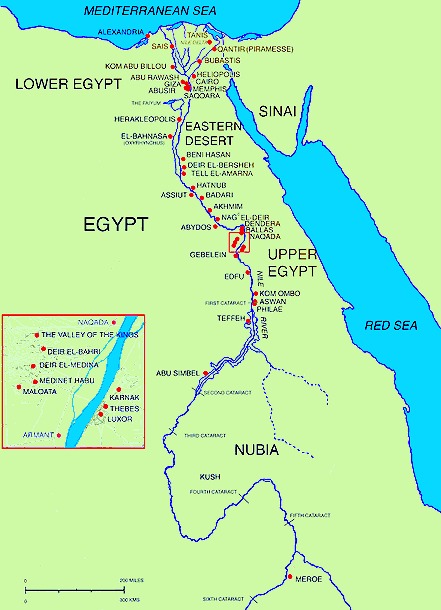 Little is known about the physical application of tattoos during this time and as archaeological information is still being unearthed, we will mostly explore the ethereality of Kemetic Tattooing. These mummies were discovered along the Nile River, in the early 1890s, showing a vast difference in tattooing traditions in regions from Egypt to Nubia. The city of Gebelein was one of many along the Nile, located in Upper Egypt between Luxor and Edfu/Aswan.

This map was chosen to show the entirety of the Nile River, reaching from Nubia and borders of modern day Sudan, to Alexandria and the Mediterranean Sea. When looking at the area of Lower Kemet, the top of the river mimics a fan or the shape of a Blue Lotus Flower (a sacred flower used for medicine, healing, and ceremony). It also puts into question why Upper Egypt is located in what we now know as South, and Lower Egypt located in what we now know as North. Comparably, in Ancient China, the Bagua (八卦) and Nine Palaces (九宮), (adapted from the Hetu 河圖 "Yellow River Chart" and the Luoshu 洛書 "Inscription of the River Luo"), a multi-functional map given from the Heavens for; divination, medicine, calendars, ciphering, etc., and are the fundamental geometric structures of the universe. In martial application, the Bagua (Eight Trigram) stepping pattern forms the symbol of the Flower of Life, which will be discussed later. Similarly to Upper and Lower Kemet, the Bagua’s North and South are flipped and are found in many different regions of the world.

The symbols tattooed on their bodies range from lotuses, snakes, cows, and baboons, and many of which are blurred without the use of infrared technology. The speculations of these tattoos and meanings are of my own interpretation and I believe that everything that was done during this time was completely intentional and calculated, filled with immense power and meaning. Some esoteric schools and spiritual practices maintain the idea placement of an image/emblem on a person or object; it seals, transforms, or protects the energetic field, among some of the many functions and capabilities. Tattooing the body can undoubtedly have the same effect.

This image is most well-known for the Gebelein mummies (photo credit: Anne Austin), which shows the clarity and purpose behind why these tattoos were placed on the throat. First, the two most superior and lateral designs depicts two mirrored baboons (Baba or Babi). In the center is a single Eye of Horus (left Eye is related to the Moon and is called the lunar eye, the right Eye is related to the Sun, known as the solar eye). The Moon is deified as the Kemetic god, Tefnut (Yin 陰) and Sun as the god Shu (Yang 陽). Below are a set of eyes, interchangeably called the Eye of Wadjet (meaning "whole one"), associated with many different early Kemetic gods.

The cobra-headed goddess (Wadjet) was deemed the overseer of Lower Egypt, and her sister (Nekhbet, who oversaw Upper Egypt) were the daughters of RA. Each eye may be each sister, as the unified period of Upper and Lower Egypt. Wadjet is usually shown without the body, solely her cobra form and lovingly placed on the crown of RA to immortalize and represent the closeness of RA to his daughter. RA themself is the first anthropoidic being to emerge from the Source/One/Absolute, also represented by the Sun, they are said to have given birth to our known world.

According to my kind and knowledgeable guide Khaled, who was one of the last babies born in the Temple of Dendera's birth chamber, and is very familiar with the Temple of Dendera--he informed me that this personified version of Wadjet on the body of a human, is quite rare and wanted to share it. (photo credit: Jess Chiang). The snake or cobra is infamous in most ancient religions, aside from Christianity, as a protective and higher spiritual knowledge or attainment. Snakes have also been illustrated intertwined and passing through all chakras or energy centers up towards the crown, sometimes with a pinecone at the top. This is commonly known in its Vedic term, “kundalini.”

The Kundalini symbol is also known in Greek as the caduceus and is the universal sign for medicine, often linked with the god Hermes who is the Greek deification of Djehuti (Thoth, the time-traveling ibis-headed god known for bringing writing, knowledge and wisdom from before our existence). The tattoo on my left shin (by Sonju Rattler) is a solid design that shows the components aforementioned. The staff is reminiscent of our spinal column and the interlaced snakes can be interpreted as a double helix or genetic DNA structure. The pinecone contains the seeds of the coniferous pine tree, a metaphor for immortality, enlightenment, or higher forms of consciousness due to its highly potent medicinal benefits and ability to live through all seasons. When looking at either end of a pinecone, a natural spiral pattern forms, which is the symbol of the "Flower of Life.” This symbol was even seen behind the Temple of Seti I in Abydos in the Osirian Temple, first discovered by Katrina Raphaell:

In esoterism, the pinecone is a quintessential symbol for the “third eye” or pineal gland that is part of the thalamus within the limbic system of the brain. The limbic system, second or mammalian brain exists in all mammals, it’s responsible for language, emotions, and memory and still widely remains a mystery to this day. This piece is interesting and leads us to raise questions about the pineal (French pinéal, literally "like a pine cone," from Latin pinea "pine cone,") and its striking resemblance to the Eye of Ra & Horus (photo included above).

The pieces continue to unlock and fall into place once one door is opened and Djehuti's proverb, "as above, so below, so within, so without, as the universe, so the soul," becomes even more apparent. The significance of the Eyes is broken down, section by section, each part with a specific purpose, protection, measurements for pigments, formulas, and medicines. Broken into six senses, strategically fractionated by how much energy our mind spends through each; smell, touch, taste, sight, hearing, and thought. There is no one myth around the Eye of Ra, however, the story that speaks closest to the tattooed baboons and Wadjet herself, is this:

Baboons are often around the entrance of temples or tombs, sometimes even melded with Djehuti. This photo was taken inside the artist's tombs near the Valley of the Kings (photo credit: Jess Chiang) to the left of a scene of Anpu (Anubis) doing a ceremony of Death & Judgment for Ausar. In their hands, Baba is holding the Eye of Horus, with the sundisk atop the head. Since the Eye itself is a true symbol of intuition, vision, RA, and the individual soul, it could mean that the Babas are keepers of innate wisdom that precedes our own. Going back to the mummy’s neck tattoos, this concept can be taken and translated to the way the baboons are sitting on both sides of the Eye of Heru, of the falcon-headed god. Heru symbolizes the duality of illusion and reality that must be conquered from within. It goes back to the story of how he lost of his eye in the battle against his brother Setekh (Set) to defend his mother (Auset) and father (Ausar), his body was cut into many pieces and spread throughout the world. The Eyes are much less commonly shown together and can be understood as the essence of creative Divine power that can help with transcendence into higher spirituality or the afterlife, as well as protect and ward off evil. After everything was said and done, this eye was restored to him by Djehuti (Thoth)...the word in which our world was born.

I believe the primary reason these are tattooed in this orientation is because our throat emits frequency and sound, ultimately creating a form of communication to the internal and external world. In many ancient religious texts, they talk about the first medicines or the first moments of existence.

The very first phrase in the Bible, "In the beginning was the Word, and the Word was with God, and the Word was God. (John 1:1 King James Version). The "word" itself is a sound spoken and arguably, given directly from God. In Daoism, the very first medicine was music and the first way we come into this world is through our voice. Our entire body works as a system, and each system has smaller components, within those smaller components are even smaller ones. This goes the same in the other direction; if we look at our Sun, it is a star that is part of a solar system, this system is part of our Milky Way Galaxy, and this galaxy is one of infinite amounts in the universe. Recently, theories of the multiverse have come to light, which is basically going back to our cells and the way an embryo goes from unicellular to multicellular. Even when we think of sending messages out to space in attempts to reach other lifeforms lightyears away, we create things like NASA's Golden Record, a compilation of sounds and music the Earth makes.

Many belief systems talk about sound and frequency--how everything in the universe has its own vibration, ancient and indigenous cultures use stones and crystals because of this shared philosophy. They are composed of certain formulae of elements, compacted through time, to create this geological entity. The Kemites were aware of this and used them daily, even taken as an oral medicine to treat gallstones, or powderizing lapis to make the signature lines around their eyes. This cosmetic technique was probably used for more than just superficial reasons and may have been an emulation of the Eye of Horus/RA. The lapis lazuli stone was of great importance to this culture, maybe because of its resemblance to their ancestral night sky.

There are some accounts that claim inks were made from soot or carbon and is likely true. However, I believe tattoo inks were also made by powderizing crystals that they used and loved so purposefully. Colors varied from black, blue, green and others, and getting the right pigmentation would’ve been possible with stones like black granite, galena, and malachite. Some instruments that were found around these sites were made of copper, a highly antimicrobial and sterilizing metal that would decrease the chances of infection and could potentially heighten immunity.

Magic and medicine were two essential and interconnected practices in Ancient Kemet, one could not exist without the other. Contrary to some information out there, I imagine that the Kemites saw tattooing as a way to connect with higher forms, to communicate and attune with their own spirituality and likely used so many techniques and methods that are completely unknown to us. Over time, I hope more information comes forth about how tattooing was done and where it may have come from. The sophisticated level of knowledge, capabilities, and intention behind this civilization is something to be marveled and respected... it is one that is infinite and can teach us so much more than what we now know.

All referenced material is linked in the article.